Before we even install the machine, we should do some sort of stress-testing or burn-in so that we don't go through the lengthy install process and put into production fautly hardware.

This implies testing the various components to see if they support a moderate to high load. A tool like stressant can be used for that purpose, but a full procedure still needs to be established.

This will wipe parts of /dev/sda, so be careful. If instead you want to test inside a directory, use this:

Stressant is still in development and currently has serious limitations (e.g. it tests one disk at a time and clunky UI) but should be a good way to get started.

This document assumes the machine is already installed with a Debian operating system. We preferably install stable or, when close to the release, testing. Here are site-specific installs:

The following sites are not documented yet:

The following sites are deprecated:

The post-install configuration mostly takes care of bootstrapping Puppet and everything else follows from there. There are, however, still some unrelated manual steps but those should eventually all be automated (see ticket #31239 for details of that work).

The procedure below assumes the following steps have already been taken by the installer:

All commands to be run as root unless otherwise noted.

IMPORTANT: make sure you follow the pre-requisites checklist above! Some installers cover all of those steps, but most do not.

At this point, the machine has a basic TPA setup. You will probably need to assign it a "role" in Puppet to get it to do anything.

If you want to understand better the different installation procedures there is a install flowchart that was made on Draw.io. 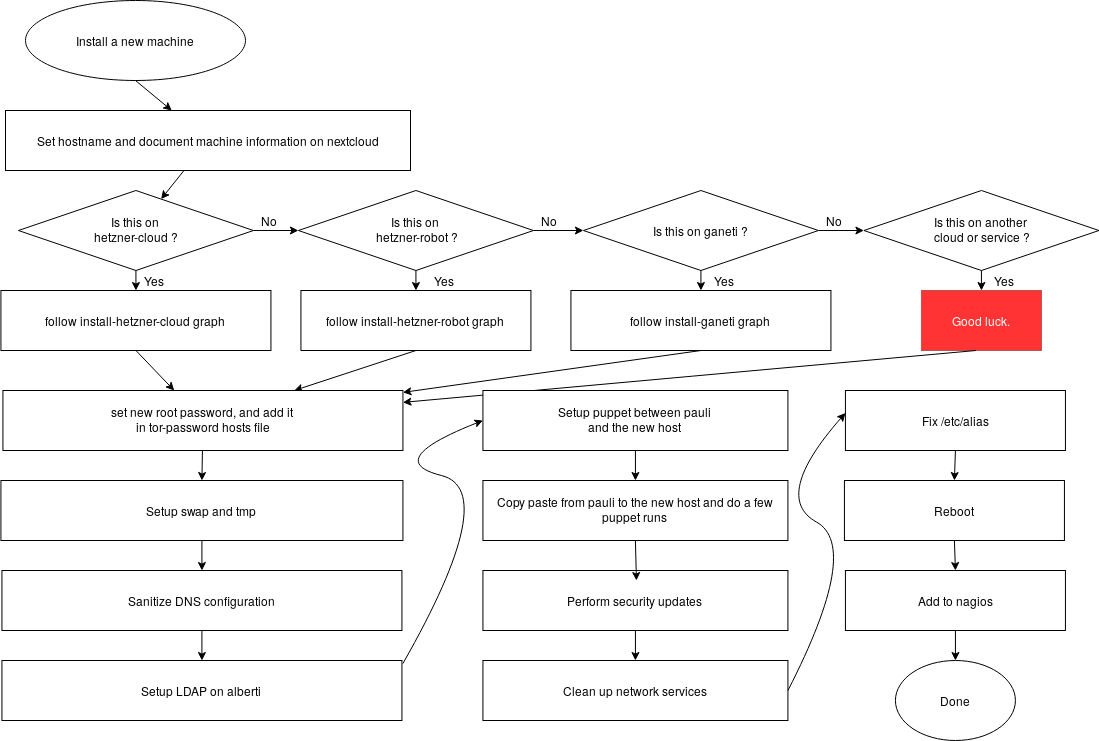 There are also per-site install graphs:

To edit those graphics, head to the https://draw.io website (or install their Electron desktop app) and load the install.drawio file.

Those diagrams were created as part of the redesign of the install process, to better understand the various steps of the process and see how they could be refactored. They should not be considered an authoritative version of how the process should be followed.

The text representation in this wiki remains the reference copy.

Issues regarding installation on new machines are far ranging and do not have a specific component.

The install system is manual and not completely documented for all sites. It needs to be automated, which is discussed below and in ticket 31239: automate installs.

A good example of the problems that can come up with variations in the install process is ticket 31781: ping fails as a regular user on new VMs.

This section discusses background and implementation details of installation of machines in the project. It shouldn't be necessary for day to day operation.

The current install procedures work, but have only recently been formalized, mostly because we rarely setup machines. We do expect, however, to setup a significant number of machines in 2019, or at least significant enough to warrant automating the install process better.

Automating installs is also critical according to Tom Limoncelli, the author of the Practice of System and Network Administration. In their Ops report card, question 20 explains:

If OS installation is automated then all machines start out the same. Fighting entropy is difficult enough. If each machine is hand-crafted, it is impossible.

If you install the OS manually, you are wasting your time twice: Once when doing the installation and again every time you debug an issue that would have been prevented by having consistently configured machines.

If two people install OSs manually, half are wrong but you don't know which half. Both may claim they use the same procedure but I assure you they are not. Put each in a different room and have them write down their procedure. Now show each sysadmin the other person's list. There will be a fistfight.

In that context, it's critical to automate a reproducible install process. This gives us a consistent platform that Puppet runs on top of, with no manual configuration.

The project of automating the install is documented in ticket 31239.

The solution being explored right now is assume the existence of a rescue shell (SSH) of some sort and use fabric to deploy everything on top of it, up to puppet. Then everything should be "puppetized" to remove manual configuration steps. See also ticket 31239 for the discussion of alternatives, which are also detailed below.

Unfortuantely, I ruled out the official debian-installer because of the complexity of the preseeding system and partman. It also wouldn't work for installs on Hetzner Cloud or Ganeti.